Who the (Bleep) Did I Marry?

Please see our “About,” “Why Radfem?” and “The Gears” pages for additional information about this project.

Male entitlement.  This is what male entitlement looks like!  An entire series on the Investigation Discovery channel dedicated to the phenomenon of men lying to and conning women in order to obtain and maintain access to women’s unpaid sexual, domestic and reproductive services.  There are even a couple of episodes on female conmen (!) because equality.  But it doesn’t exactly mean the same thing when women lie to and “con” men, now does it?

Men lie to and con women all the time, because men — being born into the privileged oppressor class — are entitled to the unpaid sexual, domestic and reproductive services of women and by god they will get what they deserve.  Men lie to and con women within the context of sexual and intimate relationships because the point for men of these relationships is gaining and maintaining access to women’s services; the point for men is notably *not* to be good or quality partners to women.  Men lying to and conning women is so common that it’s often joked about and minimized, even though (or because) it is the source of tremendous female suffering and endangers women’s financial security and safety, and causes incalculable anxiety, stress and emotional, mental and psychic pain.  Criminal liability may even attach to the woman if he has included her in his criminal enterprises.  See also Joke’s on Women.  Because this is all very funny isn’t it?  Har.  See also Woman as “useful object”.

Normalize abuse/neglect.  Focusing on extreme examples of men lying and conning women — and those offenses for which the men are caught — serves to normalize lesser or unknown offenses which almost all men perpetrate on their female partners at some point within the context of the het partnership, due to male entitlement.  See also PIV-centric narrative — Rape and rape culture.  Lying to obtain women’s consent to sexual intercourse is rape.

Tags: conmen, Investigation Discovery, Who the Bleep Did I Marry 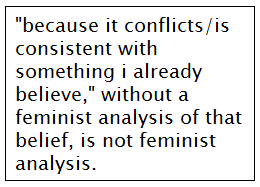 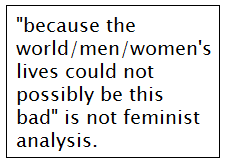